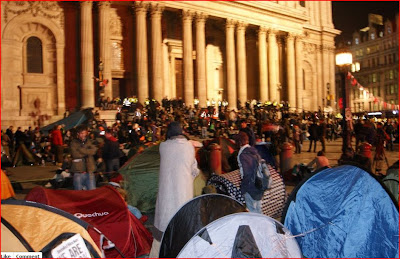 The Occupy London protesters camped outside St. Paul’s are planning to launch their own newspaper – Occupied Times of London – this afternoon.

Around 2000 copies of the newspaper will be distributed to people from the camp, visitors and city workers.

The first copy will be framed and donated to the Museum of London. The paper has been created in a week and will be 12 pages of comment, news and information.

Meanwhile, Occupied London has disputed press reports that only 90 per cent of their tents are occupied overnight. They say: “This is simply not the case. We try to keep vacancy to a minimum and operate a sign in/sign out system to help ensure this happens. When someone knows they will not be staying overnight, they offer their tent to someone else.”

The Telegraph has used thermal imaging cameras to check if the tents are occupied (see video and read the original post here). The organisers say: “We might be in a public space, but these tents are our homes – at least some of the time – and everyone has a right to privacy. Being woken up in the middle of the night by a journalist with a camera is an unpleasant experience, and even more so for a female sleeping in a tent alone.”

The Telegraph says one of its reporters and two video colleagues were evicted from the Occupy site and the journalist was called “slime” by the protesters.