Posted June 14, 2011 by AWMWC in Events and Activities 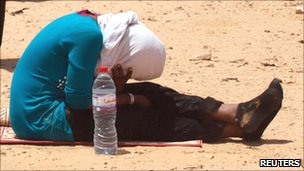 Libyan women and girls who become pregnant through rape risk being murdered by their own families in so-called “honour killings”, according to aid workers.

Rape is a sensitive topic worldwide, but in this country it is even more of a taboo.

“In Libya when rape occurs, it seems to be a whole village or town which is seen to be dishonoured,” says Arafat Jamal of the UN refugee agency, UNHCR.

Libyan charities say they are getting reports that in the west of the country, which is particularly conservative, Col Muammar Gaddafi’s forces have tended to rape women and girls in front of their fathers and brothers.

“To be seen naked and violated is worse than death for them,” says Hana Elgadi. “This is a region where women will not go out of the house without covering their face with a veil.”

Ms Elgadi is in a group of Libyan volunteers offering medical help and HIV tests. The organisation is also offering to pay for abortions for women who have been raped in the war.

“Time is against us,” says Nader Elhamessi from the Libyan aid agency, World for Libya.

“For the moment pregnancies can be disguised, but not for much longer. Many fathers will kill their own daughters if they find out they have been raped.”

“It is killing done with love,” says Ms Elgadi. “They believe they are saving the girl.”

“That’s why we are offering to pay for abortions for women who want them,” says Ms Elgadi. She says fatwas – Islamic clerical rulings – have already been made, which sanction abortion in circumstances such as rape.

The charity World for Libya has engaged imams across the border in Tunisia to preach that rape is not the victim’s fault.

An estimated 130,000 people have fled western Libya for Tunisia, and the Libyan NGOs which have sprung up to deal with their needs say they believe many are rape survivors who are too ashamed to come forward for help.

World for Libya is trying to reach a group of teenage girls still inside Libya whose school was attacked by forces loyal to Col Gaddafi.

“The armed men separated the girls and raped those they deemed more attractive,” says Nader Elhamessi. “One of the girls cut her wrists and killed herself rather than face the shame. The rapes were only reported to us by the girls who were left alone.”

One family who contacted Ms Elgadi needed medication for HIV.

“The mother, the father and the son were all raped by Col Gaddafi’s forces. The mother came to us when they discovered they had contracted HIV/Aids as a result.”

Ms Elgadi says the father has gone back to Tripoli rather than get help. “The mother desperately wants anti-retrovirals for herself and her son, but is afraid to go to the hospital in Tunisia in case other Libyan refugees see her and guess that she has been raped.”

“Rape is a crime in this war, like being shot,” says Ms Elhamessi. “We are even flying in a highly respected sheikh from the Emirates so he can get this message across.”

The International Criminal Court says it believes Col Gaddafi’s forces are using rape as a weapon of war. The ICC says it has reason to believe orders to rape were given, and the drug Viagra was distributed to fighters.

A major in the Libyan army who has now deserted told the BBC the shipments of Viagra were widely known about, but neither he nor his colleagues saw them.

“The order to rape was not given to the regular army,” says the major, who did not want his name to be used, because his family is still in Tripoli. “Col Gaddafi knew we would never accept it. It was given to the mercenaries.”

Mr Jamal, the UNHCR’s emergency co-ordinator for Libya, says it has not so far uncovered evidence that rape has been used as a weapon of war, although it has seen evidence of individual instances of rape throughout the country.

“We have also seen evidence that would seem to suggest that rape has been carried out by both sides, but we cannot say on what scale,” he says.

Libyan volunteers are advising international agencies on how to get Libyans who have been raped to come forward.

“A foreigner cannot go in there with a clipboard and a translator and get a response,” says Ms Elgadi.

Israel’s deliberate slaying of journalists must be discussed

Why is the Newseum hosting an Israeli military officer who aided and abetted the killings of two reporters whose names are included in the Washington institution’s Journalists Memorial? Israeli who helped kill journalists to speak at Newseum